Small Preludium to Brian Agro’s poems and preludes Remarkable about this music is its lack of remarkableness. As Erik Satie in Relâche, it appears to say ”I would rather not disturb!” The pieces are short, based mostly on a motive and are named simply and neutrally: short piece, étude, poem, prelude. Apparently the composer does not want to put too much of a burden upon the pieces; the ear should not search for the extraordinary. And yet because of such appearances (or their lack thereof), because of the simplicity of the pieces, this music seduces one to listen carefully.

What, however, does ”unremarkable” really mean? Measured by the high pressure seriousness of some contemporary avant garde or by the boisterousness of free music, Brian Agro’s music may seem at first reduced and reserved—or downright quotidian. The melodies often simply came to him, at any location, he said, and then he developed them further, processed them in sensitive ways with simple accompaniments, arpeggios, harmonization. Extraordinary that that banality never emerges amidst this simplicity. Indeed, being able to deal with this is one of the most difficult sides of composing: neither should the simple appear too simple, nor should it seem inflated and ridiculously boastful—avoiding these pitfalls requires caution and skill. The nuance, the small deviance gives this music a kind of secret and causes the ear to search. Brian Agro succeeds doing this in a way that reminds one of Erik Satie or the Catalonian Federico Mompou. The surprises are found in the apparently ordinary.

Central to all this is the harmonic color, which often moves in warm, darker areas. In their softness and sensuousness, the associations one hears, sometimes on Alexander Skriabin, never become all too clear; in places, gesturally one is reminded of French composers of the early 20th century. These constructions, however, help friends of music history. Analyzing is not so important; enjoying, rather, is. It is as difficult to explicitly put Brian Agro in a category as it is to isolate him from one. In contrast to his older CD ”a hole in the ice” (percaso productions 06), one notices that the reduction has been taken further. The tonal language has become more tonal, the gestures simpler. The whole seems almost classic. Indeed, it presents its own style so naturally that the small deviations from the conventional, the ”disturbances,” are not perceived as such. Thus, not too much! A small irony may be enough to exemplify this: titles like ”peintre célèbre” or ”zainta” come from racing horses. Or a small breach may suffice: doesn’t the music in ”what goes up” go down rather than up? And is a neo-classical trill like in ”prelude 12” not already at the limit of stylistic allusions? Even where a conclusion opens up, or the music resolves, even in ”peintre célèbre” or the ”improvisation on Resolution 4,” where Thomas Bächli had some improvisational freedom, the frame is not exceeded. Precisely such pieces also show how unified (if also not hermetically finished) this small cosmos of Brian Agro is. He has sorted out a style without having to put a huge trademark upon it. Thomas Meyer, Translation: Bruce CarnevalE

Poems and Preludes presents twenty of Brian Agro's latest compositions for solo piano, interpreted and performed by Tomas Bächli. Brian Agro, born in Hamilton, Canada and now living in Berlin, released his debut CD on Percaso in 1989 titled A Hole in the Ice. Tomas Bächli, born in Zurich and now also living in Berlin, has been awarded numerous prizes for his work in promoting, interpreting and performing new music. Describing these pieces does not come easily, although listening to this music comes with great ease. Compositions for solo piano often capture my interest and imagination, although I often struggle to describe exactly what it is that so captivates me. Such is the case with Brian Agro's music. All of these pieces are short (from one to four minutes in length), and are defined by what Thomas Meyer describes in the liner notes as being largely "unremarkable". These poems, preludes and études each capture their own unique mood, theme and presence. Agro's music is a book of snapshots. The style might be described as neoclassical, reminiscent in turns of Satie or Debussy, but this is merely a suggestion, an affinity only hinted at in this music. At times the music takes flight in a sudden flurry of keys, at times it returns to the soil, sullen and slow. These pieces are at once simple and complex, remarkable and unremarkable, caged and free. Poems and Preludes is a lyrical and evocative new work.

Brian Agro is a Canadian-born pianist/composer who, like Gunther Schuller, William Russo and Anthony Davis, straddles the sometimes-overlapping worlds of jazz and contemporary notated (i.e., “classical”) composition. Poems and Preludes is a collection of Agro’s pieces for piano, played here by Swiss pianist Tomas Bachli. Those who know the Percaso label for documenting the European avant/free jazz scene (the fine trio Day & Taxi, for one) may be a tad surprised by the “accessibility” of the music here. But hopefully not dismayed, for P & P is a fine, charming collection of miniatures for piano. They share qualities of some pianists’ legendary works for ECM Records in the early 70s: the unsentimental spaciousness of Paul Bley, the mix of folk simplicity and gentle urbanity of Dollar Brand/Abdullah Ibrahim and the romantic, rhapsodic nature of Keith Jarrett, while influences outside of jazz would include the piano music of Maurice Ravel (impressionist) and Phillip Glass (minimalist). And of course, the shadow of The Duke falls across the key now ‘n’ again. Yet all these sounds are not present as mere pastiche but are fully assimilated into Agro’s compositional approach. This music – extremely lyrical while avoiding sappiness, direct, reflective but never self-absorbed - seems “familiar” while also seeming like it belongs to no particular time or place at all. jazzreview.com, Mark Keresman

ALL ABOUT JAZZ, FRANCESCO CISTERNINO

In Poems and Preludes, Tomas Bachli gives a powerfully expressive solo piano performance of modern classical music by Brian Agro. The forms are varied, contrasting, and adventurous, and at times evoke the spirit of Ferrucio Busoni's early 20th century Sonatinas, particularly at track number four, entitled "What Goes Up." However, as a composer, Agro is not so easily pigeonholed, as his technique is all encompassing, making use of the complete harmonic spectrum and orchestral range of the modern grand piano. And his chromatic concept should not be underestimated. Even students of improvised music should benefit from close attention to the highly original chord structures and melodic treatments here. Make no mistake about it: these are perfect piano recital pieces. The depth and breadth of these performances make them as important as Paul Jacobs' late 1970s sessions for Nonesuch Records. 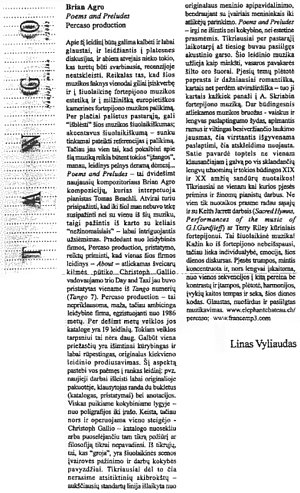